FOUNDATION FOR DEMOCRATIC PROCESS MID-DAY UPDATE STATEMENT ON PRESIDENTIAL ELECTIONS PRESS STATEMENT 13:00hrs, 20 January 2015 For Immediate Release: The Foundation for Democratic Process (FODEP) wishes to commend the voters for turning up in large numbers to exercise their democratic right by taking part in the elections. In nearly all polling stations covered, FODEP monitors were allowed access to the polling stations. However, in some areas, such as Kabwata constituency in Lusaka, FODEP monitors were refused access by ECZ officials who demanded for authorization letters despite having accreditation cards. Since opening time, our monitors have reported that the elections have proceeded smoothly without disruptive incidents, thus far. FODEP wishes to commend all electoral stakeholders – Political Parties and their members, the Police, and the electorate - for conducting themselves in a peaceful manner and allowing for a peaceful voting, thus far. FODEP monitors from across the country report that most of the polling stations covered had opened in good time with fairly long queues in the early mornings. However, some polling stations are reported to have opened late to very late, with others opening as late as 10:20hrs for various reasons ranging from late delivery of Ballot Papers and other materials by the ECZ due to rainy weather and electoral staff: • In Katuba and Keembe constituencies of Chibompo district, about 7 polling stations received their election materials at 10:20 due to bad weather in the morning. Also affected were Icumvwe and Musungashi polling districts. • Lumbuka polling station in Petauke district was as at 08:36hrs not opened as the Presiding Officer was reportedly not present at the polling station. FODEP is concerned with some reported incidents that border on the violation of the smooth conduct of the elections as reported from the Monitors: • Some overzealous political sympathizers are reported to have been going round urging or canvasing for votes even beyond the campaign period ended yesterday at 18:00hrs. For instance in Kapiri-mposhi district around 07:56 hours today, it is alleged that an unregistered green vehicle (Mitsubishi Pajero) branded in PF regalia was seen making rounds between the Fire Brigade and Kawama residential areas campaigning. • In Lusaka’s Kaunda Square Basic School, a UPND political agent was seen campaigning as he was flashing the party symbol, and yet the campian period was closed at 18:00hrs yesterday (19 January 2015) • FODEP is concerned that a considerable number of voters are being turned away from voting due to errors committed by ECZ on the voters’ register. In many polling stations, such as Ibolelo Polling Station in Serenje, many voters were turned away on grounds that their names were not appearing on the voters’ register despite producing the electorate producing valid voters cards. • We are equally concerned on the alleged acts of intimidation on the electoral staff by some senior party members. At Woodlands B Polling Station, Hon Minister of Chiefs and Traditional Affairs, Prof Nkandu Luo, is reported to have threatened some electoral staff with dismissal for allegedly working with the opposition. We wish to urge party officials to desist from such intimidation and leave the electoral staff to professionally carry out their work FODEP would like to urge the Electoral Commission of Zambia to investigate reality of these claims and ensure enforcement of the electoral laws and code of conduct. FODEP monitors report that the recently announced shifting of locations for Polling stations in some parts of the country have brought about some inconvenience and confusion in some electorate, and could affect the turnout of voters: • In Mwinilunga district, Northwestern province, the electorate are reported to have shunned casting their vote due to the relocation of the polling station from FTC to Kanyikombwe primary school; • In Ndola, the shifting of the polling station for Chibesakunda polling district from Lubuto High school to Lubuto Community School, which is already too congested by a number of streams, is reported to have cause considerable inconvenience to the voters. We therefore would like to urge the Electoral Commission of Zambia to continue announcing information relating to changes of polling stations for all areas where the polling stations have been shifted to reduce any further confusion among the electorate in affected areas. We wish to encourage all voters who may not have cast their votes at this time to go and cast their votes before the close of polls at 18:00hrs. FODEP monitors are on the ground to continue monitoring and will share its comprehensive assessment of the electoral process after taking into account the remaining part of the voting process, counting and tabulation of election results. Issued by ___________________ Sheperd Chilombe, FODEP President 0977465924/0977874198 Lusaka, 20 January 2015
Posted by Unknown at 5:10 AM 2 comments: 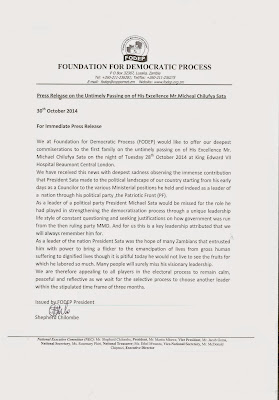 Posted by Unknown at 3:56 AM No comments:

We have spent this week working towards fostering and engendering gender in politics and decision making in Malawi with a number of countries participating in the meeting....
Posted by Unknown at 6:09 AM No comments:

Does the subject refelect what is on the ground? Are we benefiting from this kind of investment at community level? Is it just there for documentation purposes?

ZAMBIA has the highest inflow of Foreign Direct Investment among the 16 Landlocked Developing Countries in Africa, according to the UN Conference on Trade and Development (UNCTAD) Speaking at a special event on facilitating the participation of LLDCs in regional and global community value chain, UNCTAD New York office chief Chantal Carpentier said FDI flows to LLDCs fell by 11 per cent in 2013, and that the Asian group of LLDCs experienced the largest fall in FDI flows of nearly 50 per cent. “Despite a mixed picture for African LLDCs, eight of the 16 LLDCs economies increased their FDI inflows, with Zambia attracting the most at $1.8 billion,” said Carpentier. At the same function, transport minister Yamfwa Mukanga urged LLDCs to strive to attain sustainable development and save the lives of the people from the poverty circle. “Our major pre-occupation should be to find lasting solutions to the challenges we face through diversification of our economies, value-addition to the commodities we produce, and enhancing our competitiveness which will enable us join regional and global value chains,” Mukanga said according to a statement issues by first secretary for press and public relations at Zambia’s permanent mission to the United Nations, Chibaula Silwamba, adding that “This will inevitably call for greater cooperation in fundamental transit policies, laws and regulations with our transit neighbours.” He expressed gratitude that UNCTAD continually advocated for a comprehensive development-centred agenda for LLDCs to address transport, transit and trade facilitation challenges. Mukanga called on development partners to assist LLDCs invest in infrastructure, development institutions, enhancement of entrepreneurship, training of human resource and skills development, technology acquisition and impart technological know-how in the people. “Regional integration and cooperation should be strengthened under the new concept of developmental regionalism to develop regional infrastructure networks which would in turn enhance competitiveness and increase productive capacities,” he said. “Unlocking the trade potential of LLDCs will also require the prioritisation of energy supply.” Presenting a case study on Zambia, economist and interregional consultant Lindani Ndhlovu said the country should work with its neighbours within the Regional Economic Community (REC) to develop infrastructure and reduce the cost of transport and electricity. “Build a more substantial and diversified industrial base for Zambia, using the catalytic force of the large mining investments. Facilitate the development of the manufacturing sector to increase opportunities for beneficiation of copper,” said Ndhlovu. The discussion - organised by UNCTAD, the Common Fund for Commodities (CFC) and the UN OHRLLS - focused on the challenges, opportunities and the way forward for the development of the 32 landlocked developing countries. In July, the African Union said; “In recent years Zambia witnessed a substantial 93 per cent rise in investments compared to 2011, a feature attributable to a well-managed economy and a peaceful transfer of power.”- Article Written By Masuzyo Chakwe-The Post - Zambia records highest FDI inflow among LLDCs- Oct 3rd 2014
Posted by Unknown at 4:05 AM No comments:

PEG Net Conference on Employment strategies in the Developing World - How to create sufficient, productive and decent jobs

FODEP will be exhibiting at this year's PEG Net Conference on Employment strategies in the Developing World - How to create sufficient, productive and decent jobs organized by the Zambia Institute for Policy Analysis and Research (ZIPAR) at the New Government Complex in Lusaka, Zambia September 18-19, 2014 Conference tomorrow at Government Complex. Come and See what we have to offer
Posted by Unknown at 7:24 AM No comments:

Up Dates from the Mangango By-Elections

From our monitors in Mangango, Voting commence at 06:00 this morning. the overall situation: There are no signs intimidation or violence so far, voter turnout is avarage across polling stations. this Morning at 11:00 Chief Mwenemutondo of the Nkoya Speaking people cast his vote at Mutondo Primary School in Mangango constituency. This is an indication of the importance he has attached to the by-election and the democratic process of his country.Voter turnout in mangango is average as of 11:00 today 500 out 1832 voters had voted at Mangango primary school, 150 out of 682 voters had voted at Mutondo primary school in Mangango. We will keep you posted
Posted by Unknown at 6:35 AM 4 comments:


FODEP is a civic, non-governmental organization dedicated to the promotion and strengthening of democratic governance in Zambia through advocacy and civic education programmes on the electoral process, local governance and development, and human rights.

The organization was formed in 1992 as a successor to the Zambia Election Monitoring Coordinating Committee (ZEMCC), a consortium of civil society organizations which was in-turn formed in 1991 to monitor Zambia's first round of multi-party elections.

We envision a democratic Zambia where government is accountable to its citizens and in which all citizens freely and willingly participate in the social, political and economic affairs of the country.